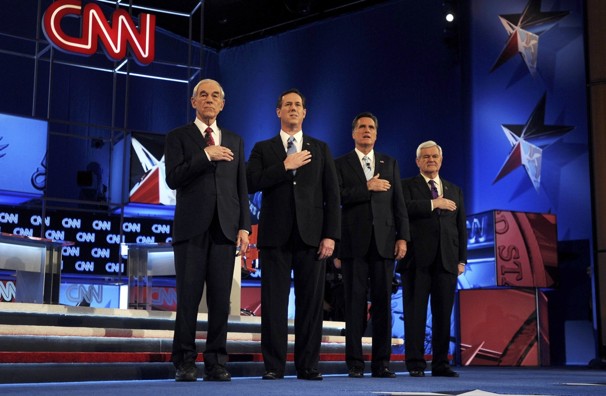 The national debt is likely to balloon under tax policies championed by three of the four major Republican candidates for president, according to an independent analysis of tax and spending proposals so far offered by the candidates.

The lone exception is Texas Rep. Ron Paul, who would pair a big reduction in tax rates with even bigger cuts in government services, slicing about $2 trillion from future borrowing.
According to the report — set for release Thursday by U.S. Budget Watch, a project of the bipartisan Committee for a Responsible Federal Budget — former Pennsylvania senator Rick Santorum and former House speaker Newt Gingrich would do the most damage to the nation’s finances, offering tax and spending policies likely to require trillions of dollars in fresh borrowing.

Finally, something good about Ron Paul has made it to a MSM news outlet. Now I wonder if this will be spoken about on TV MSM. I didn't read all of the comments at the place this article takes you, but I did notice that no one was mentioning Ron Paul. Hopfully, people are not going to continue to be idiots for those other candidates. Down with Obama. May he never rise again...

MOST OF THE "FACT-CHECKING" ORGANIZATIONS FACEBOOK USES IN UKRAINE ARE -

After a National Divorce, Where Does the Debt Go?

Ukraine Claims it Needs $750 Billion More to 'Build Back Better'

Chipmakers battle for slice of US government support

Federal Spending Is the Problem with Inflation

The Real Policy Error Is Expanding Debt And Calling It "Growth"

Tucker Carlson: This is shameful

The Bankrupting of America

U.S. DOT to "address past wrongs from the development of highways, rail lines and -