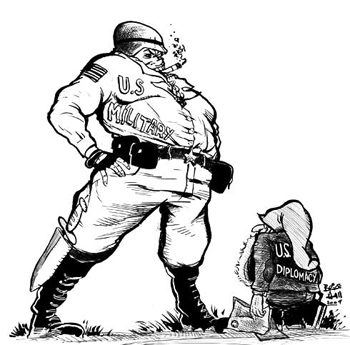 War. Wars. Wars in Iraq and Afghanistan. The drumbeat for war in Iran.

"There is a tsunami coming to the United States," says Rep. Walter Jones, R-N.C., consisting of the trillions of dollars of debt and veterans' health care obligations for wars we cannot win and a military machine we cannot afford.

So Jones, no liberal and a lonely voice in the Republican Party (with his favored presidential candidate, Ron Paul), asks one simple question of Americans: "Where is the outrage?"

Jones was in Raleigh at the General Assembly auditorium Monday for a town hall meeting sponsored by N.C. Peace Action and the American Friends Service Committee-Carolinas Office. The topic: "Bring Our War Dollars Home/ Restore Our Communities."

The point was to highlight and underline the costs of our ongoing military-industrial complex and the wars it's waged since 2001 in Afghanistan and Iraq. The direct and indirect costs (including veterans' health benefits) of the two wars thus far are at least $3 trillion, according to Matthew Hoh, a senior fellow at the Center for International Policy in Washington, D.C. Hoh is also a former State Department official who quit in protest after he was posted to Afghanistan and saw the futility of keeping U.S. troops there.

1 Comments in Response to Not too poor for the wars

"Jones, who apologizes for allowing himself to be misled into supporting the war in Iraq. - It is time to have a defense, not an empire-builder around the world." -- I know others are out there that feel the same way of those that went to Iraq/Afghanistan. So, thanks to Rep. Walter Jones for coming forward with this article. For myself, I can mention this to others that are not understanding the true cost of these wars. Ron Paul 2012

What Can We Learn About Covid Tyranny From Australia And Afghanistan?

'I demand accountability, if we don't get it, I'm bringing it!'