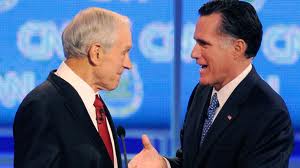 Special comment from Alex Jones: Ron Paul is an intelligent man of total integrity. I am willing to wait and see how this all shakes out before passing judgment. However, just the idea of Paul’s campaign working with Mitt Romney to do some kind of political deal seems like a bad idea, and my initial reaction is that it’s unlikely to come to fruition.

The suggestion that Ron Paul and Mitt Romney are in cahoots because Paul is in the frame to be Romney’s VP pick has again surfaced following last night’s Republican debate in Mesa, Arizona, after which Rick Santorum claimed the two were coordinating attacks against his candidacy.

5 Comments in Response to Has Ron Paul Formed a Political Alliance With Mitt Romney?

Heh, heh, he, e.e. Panocha, if your man turns chicken, that would be a double whammy for you ... heh, heh, heh...! Sorry, guys. I can't help laughing. Panocha is really funny! If you can laugh in this angry and deadly website, chances are your sanity is still intact, and you can survive.

Laurels again to you, JV! You are as brilliant as Santorum.

Your use of the word "weasel" in describing Ron Paul is virtuoso. The weasel is brown when young and vigorous in summer, but when old and winter comes, it turns its color into ashen white, as if it is dying.

Ohssss … I am tired with these guys. I want a relief. I am still looking forward to that date PureTrust had in mind. The man who has a crush on me bringing me to dinner, why that would be indeed, a relief. But I think my man has turned chicken.

I don’t think Romney is that stupid. Why would he team up with those two losers? I know people are scratching their head. They don’t get it. I do.

1. Notice carefully that only Romney can beat Santorum. Santorum has to make his move.

2. Don’t make a mistake: This media-hyped accusation of treacherous collaboration between Romney and Paul came from Santorum.

3. Santorum is accusing the two of joining forces behind his back to defeat his candidacy. Of course Santorum can tell that to the Marines, but not to me. He is pulling a brilliant strategy, killing two birds -- Romney and Paul – with one stone.

1. Santorum is picturing Ron Paul as a weasel-dealer who like a hooker is selling himself to Romney for a price, just about the time that Ron Paul is quitting the presidential race. Ron Paul has nothing to lose. He is a perennial candidate for president for many years. Every presidential election year he is always a candidate for president, knowing that as an "unelectable" candidate he will never win, but somehow he always expects to get something out of it. So in the eyes of the public the weasel deal that Santorum is announcing has the appearance of "truth" …that is, that the accusation coming from Santorum that Ron Paul is conniving with Romney for a price is not a propaganda lie.

2. Santorum is pretty much aware that if Romney takes the bait he is dangling, and Romney teams up with Paul as his running mate, it is a kiss of death … it is the end of Romney. Santorum killed two birds with one stone.

In the event Romney smells something fishy and dumps Ron Paul as his VP, Rand Paul, the son, might as well be his VP. Sen. Rand Paul had made himself a "model" how to violate the law on national security in the name of "liberty" and "freedom". He has been "detained" in the Nashville airport for refusing to go through security screening. No airline passenger would take the same flight with anyone who refused to be cleared by airport security. And that was what exactly terrorists want. What the terrorists cannot do, Sen. Paul is doing for them.

The "liberty" and "freedom" that radical Sen. Paul and his father are mouthing in public are no different from that of the terrorists’ liberty to kill and freedom to destroy us.

If I were one of the airline passengers about to board the airplane threatened by a co-passenger – a Senator -- who refused to be cleared by airport security … Sen. Ran Paul for Vice President in Romney’s ticket? That would be a kiss in the ass.

I am for Romney, but I might change my mind and go for Santorum – his reward for hatching this brilliant strategy. Santorum for President of the United States? Absolutely, we need a brain like that. Joseph Vanderville.

Seems to me that it would be completely outside of Ron Paul's character to ally himself with Romney in any way. The fact that they have both been officials in the same Government at the same time should be irksome enough for RP.

Rushdie on Ventilator Unable to Speak, Was Stabbed in Liver, Likely to Lose Eye: Agent