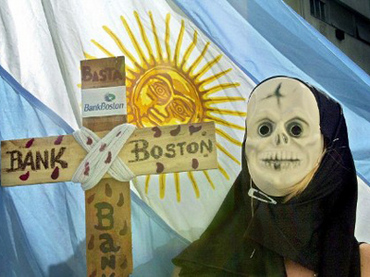 Here in Argentina, when we watch the terrible things that are happening today in Greece, we can only exclaim, “Hey!! That’s exactly what happened in Argentina in 2001 and 2002…!”

­A decade ago, Argentina too went through a systemic Sovereign Public Debt collapse resulting in social turmoil, worker hardship, rioting and street fights with the police.

Some months before Argentina exploded, then-President Fernando de la Rúa – forced to resign at the height of the 2001 crisis – had called back as finance minister the notorious pro-banker, Trilateral Commission member and Rockefeller/Soros/Rhodes protégée Domingo Cavallo.

Cavallo was the gruesome architect of Argentina’s political and economic capitulation to the US and UK when he was President Carlos Menem’s foreign minister and economy minister in the ’90s.

Menem and Cavallo are primarily responsible for Argentina’s signing of a formal Treaty of Capitulation with the UK/US after the 1982 Falklands War, opening up our economy to unrestricted privatization, deregulation and grossly excessive US Dollar-indebtedness, almost tripling our sovereign debt in a few short years (see my February 11, 2012 article British Laughter in the Falklands).

1 Comments in Response to Argentine advice for Greece: ‘Default Now!’

Wow. That's pretty good. Only Dr. Paul could have said it better, I think.