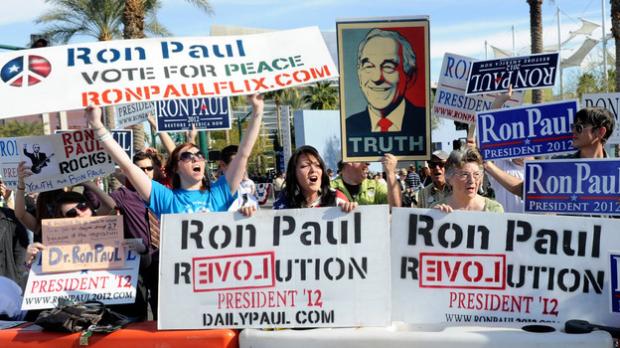 Benom Plumb, a 31-year-old music industry executive from Nashville, thinks the country is on the wrong path, and that Ron Paul is the only candidate who can turn things around.

As for the other Republicans, Plumb doesn't mince words: Mitt Romney? Too slick. Rick Santorum? Too religious. Newt Gingrich? Untrustworthy. "They are all liars and cheaters, if you ask me," he says.

While the other GOP contenders have seen their fortunes wax and wane with voters, Paul has enjoyed steadfast, if relatively low level, support from an obsessively loyal base of backers. But if his long-shot bid falls short, will they throw their votes to one of his rivals?

It could prove a difficult sell, political observers say, because Paul's supporters are famously leery of the Republican establishment.
"The kind of voter that likes Ron Paul does not fit neatly into any of the other candidates' profiles," says Cary Covington, a political science professor at the University of Iowa.

8 Comments in Response to For Loyalists, Is It Ron Paul Or Nothing?

From the movie "Easy Rider."

George Hanson: You know, this used to be a helluva good country. I can't understand what's gone wrong with it.

Billy: Man, everybody got chicken, that's what happened. Hey, we can't even get into like, a second-rate hotel, I mean, a second-rate motel, you dig? They think we're gonna cut their throat or somethin'. They're scared, man.

George Hanson: They're not scared of you. They're scared of what you represent to 'em.

Billy: Hey, man. All we represent to them, man, is somebody who needs a haircut.

George Hanson: Oh, no. What you represent to them is freedom.

Billy: What the hell is wrong with freedom? That's what it's all about.

George Hanson: Oh, yeah, that's right. That's what's it's all about, all right. But talkin' about it and bein' it, that's two different things. I mean, it's real hard to be free when you are bought and sold in the marketplace. Of course, don't ever tell anybody that they're not free, 'cause then they're gonna get real busy killin' and maimin' to prove to you that they are. Oh, yeah, they're gonna talk to you, and talk to you, and talk to you about individual freedom. But they see a free individual, it's gonna scare 'em.

"…they will be rounded up under the severe provisions of the NDAA." – Anonymous75. That’s sad to hear that from you. "Sovereign citizens" just want to live in the United States without the Federal Government, and without anyone like you, just themselves in a State all for themselves. What’s wrong with that? The Government will put them where – in a colony? Not in Guantanamo. That is too small for their size, too undignified for their pride as an independently anti-government sovereign people

I sympathize the "freedom-hungry" and the "angry" sovereign citizens who believe they owe no allegiances to the Federal Government because they are citizens not of the United States but of the sovereign State where they reside. However, the more they are consistent with their vitriolic attacks, the more that the Government is tightening the rope around their neck. I read somewhere that Homeland Security is now ironing up the details of a "massive arrest program" under which they will be rounded up under the severe provisions of the NDAA.

The Government stinks. I am a very angry person, perhaps angrier than Powell Gammill in FreedomPhoenix.com, and I want to be Editor. Am I hired?

Powell Gammill is right. Ron Paul attracts people like convicted tax felon Larken Rose, Powell Gammill himself and according to a New Hampshire newspaper, supporters from the "lunatic fringe".

As to the hiring of an editor whose acceptable "credential" is rage, that’s not an accident.

There is a purpose for that. The website is the mouthpiece of a "Libertarian Revolution" – also sometimes called the "Ron Paul Revolution". It is not yet a violent movement; it is just in the process of turning anti-Government revolutionaries into violent combatants in the street battle for what they profess as a "fight for liberty and freedom", whatever that means. What do you think is the most important qualification to hire as Editor other than the very angry one? The dirtier the spiteful mouth is, the better.

I just found out I will be a delegate at the Maine GOP State Convention yesterday after waiting nearly 2 weeks after my local city caucus.  (I live in Portland Maine)  I feel the same way this gentlemen feels, and I will not support anyone other than Dr. Paul.  Why should I compromise my principles about leaving people alone?  Rock on Powell!!!

The angry Editor again on the loose, swearing and swinging with profanity. I can hardly believe that Ernie, the publisher, would require this kind of qualification or credential  for hiring an editor to editorially manage his website.  I thought he would hire someone and put him in the editorial board as a model for a rational and civil discussion and polite presentation of views in the altar of public opinion, not hire a filthy mouth that soils the reputation of this otherwise would have been fine on line publication. JV

This is hardly surprising.  Ron Paul attracts people who have given up on politicians/leaders for the unscrupulous mother F'ers they are.   They discover an honest man, give him their support and when he is finished they will walk away too and hope you evil or too stupid sons of bitches still worshiping and feeding at the trough choke on the dregs soon enough.