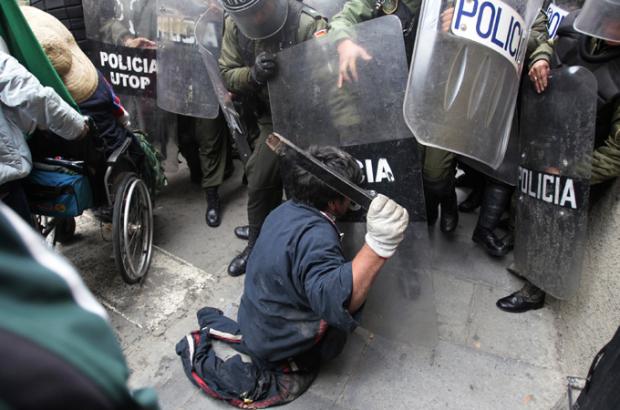 Protesters in Bolivia have clashed with police in the country's capital during a demonstration by disabled people demanding that the government pay them an annual subsidy.

A caravan of about 50 adults and children with disabilities, some using crutches, others in wheelchairs, arrived in La Paz on Thursday after a 100-day protest journey.

Clashes broke out outside parliament as crowds of protesters demanding access to the building pushed up against riot police.

At least four people were detained and the windshield of a police car was broken as the protesters banged on police shields.

The group launched its protest to call on President Evo Morales' government to pay disabled people at least 3,000 bolivianos ($430) a year.

Javier Baldivieso, Bolivia's deputy minister of government, said on Thursday that the protests were unnecessary and said the government had agreed to grant a bonus of 1,000 bolivianos, according to Bolivia's ABI state news agency.

Baldivieso said the government had also agreed a draft of a preferential treatment act with representatives for those with disabilities, including commitments on the number of disabled people employed in the public sector and an agreement on state payments.