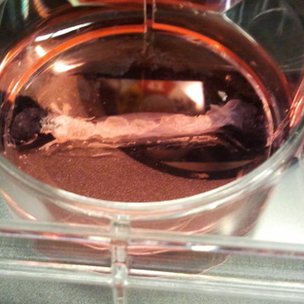 Dutch scientists have used stem cells to create strips of muscle tissue with the aim of producing the first lab-grown hamburger later this year.

The aim of the research is to develop a more efficient way of producing meat than rearing animals.

At a major science meeting in Canada, Prof Mark Post said synthetic meat could reduce the environmental footprint of meat by up to 60%.

"We would gain a tremendous amount in terms of resources," he said.

Professor Post's group at Maastricht University in the Netherlands has grown small pieces of muscle about 2cm long, 1cm wide and about a mm thick.

They are off-white and resemble strips of calamari in appearance. These strips will be mixed with blood and artificially grown fat to produce a hamburger by the autumn.
The cost of producing the hamburger will be £200,000 but Professor Post says that once the principle has been demonstrated, production techniques will be improved and costs will come down.