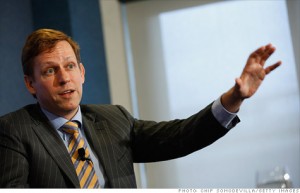 Each Republican Super PAC has its respective big-bank-account-backer, but Thiel’s contribution has people wondering why anyone would throw that much money at a candidate who hasn’t won first place yet in a single state.

In an Endorse Liberty press release, Thiel explains why these principles of liberty and small-government are so important.

“Too often in this country we learn things the hard way – whether it’s putting your nest egg in overvalued stocks, borrowing more than your house is worth, or amassing a mountain of student debt to pay for a degree with no real job prospects,” he said. “With its unsustainable deficits, government spending is heading down the same path. Men and women who want freedom and growth should take action. A good place to start is voting for Ron Paul.”

Endorse Liberty is a group of entrepreneurs and inventors who call for “open, unhampered creativity,” citing innovation as an economic engine. This organization is very much in line with what Thiel preached at the Students for Liberty conference on Feb. 17, Slate reported.

“For the first time in perhaps 80 years, we have a chance to move the country in a more libertarian direction, with a less intrusive government, in both social and economic areas,” he said.