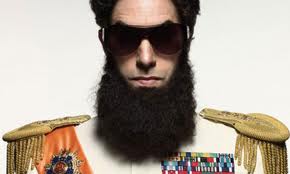 Cohen called "Today” hosts Carl Quintanilla and Ann Curry this morning -- in character as tyrannical despot Aladeen -- to express his "outrage" over the Academy's decision, saying, "I had to delay 30 executions to do this," and threatening that, if the Academy does not change its mind "oil prices might be raised."

In addition to the "Today" appearance, Cohen also posted a longer video on YouTube as Aladeen. In the video, Cohen sports a long beard and a military uniform with gold epaulets and does not bother to remove his sunglasses.
"On behalf of the nation of Wadiya, I am outraged at being banned from the Oscars by the Academy of Motion Pictures of Arts and Zionists," says Cohen. "While I applaud the Academy from taking away my right to free speech, I warn you that if you do not lift your sanctions and give me my tickets back by 12 p.m. on Sunday, you will face unimaginable consequences."