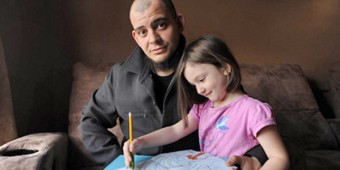 A father has been arrested, strip-searched and hauled in for questioning – all because his four-year-old daughter drew a picture of a gun at school.

“I’m picking up my kids and then, next thing you know, I’m locked up,” Jessie Sansone, 26, told the Waterloo Region Record in Canada. “I was in shock. This is completely insane. My daughter drew a gun on a piece of paper at school.”

Ads by Google
Would you re-elect Obama?Take our survey and let us know. Rewards after just ten surveys! yougov.com SolarCity® Official SiteSave $1,000 on a Home Solar System Only Valid in Feb. Get Coupon Now! www.SolarCity.com/GetFebSolarCoupon

Sansone, a Kitchener resident, had arrived at Forest Hill public school to pick up his children when he was called to the principal’s office. Three police officers informed him he was being charged with possession of a firearm. Then he was escorted out of the school, handcuffed and locked in the back of a police car.

According to Sansone, he didn’t learn what had caused the investigation until hours after his arrest. Other officers arrived at his home, where they instructed his wife to come to the police station and took his other three children to Family and Children’s Services to be questioned.

“Nobody was given any explanation,” Sansone’s wife, Stephanie Squires, told the paper. “I didn’t know why he was being arrested. He had absolutely no idea what this was even about. I just kept telling them. ‘You’re making a mistake.’”

Sansone was forced to undergo a full strip search.