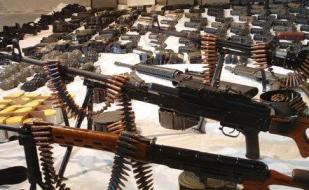 MOSCOW, February 24 (Itar-Tass) — Armed groups of Syria’s opposition from the rebel force known as the Syrian Liberation Army get more and more weapons from abroad, a source in Russia’s secret services told Itar-Tass on Friday.

“Huge batches of small arms and munitions for the Syrian Liberation Army’s troops are supplied from Lebanon, Iraq and Turkey, but unofficially, not through these countries’ governments,” the source said. “The supply list includes submachine guns, machine guns, sniper rifles and antitank grenade launchers.”

Russia’s military expert, Lieutenant General Leonid Sazhin told Itar-Tass that “the scenario that has already been developed and administered by the United States and their NATO allies, mainly by France, Britain and Turkey, as well as the monarchy regimes from the Cooperation Council for the Arab States of the Gulf, in particular Saudi Arabia and the United Arab Emirates, is being implemented in Syria.”