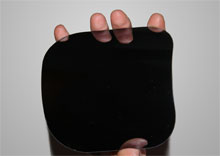 By the end of the decade, manufacturers in the United States could make solar panels that are less than half as expensive as the ones they make now. That would be cheap enough for solar power to compete with electricity from fossil fuels, according to a new study in Energy & Environmental Science. The cost reductions will come via technology that's already being demonstrated in research labs at startups, universities, and major solar manufacturers, and could involve silicon, the material most solar panels are made from today.

The report, from researchers at MIT led by Tonio Buonassisi, a professor of mechanical engineering and manufacturing, identifies early-stage technologies that, if employed together, could reduce the cost of making solar panels to 52 cents per watt. Currently, the cost is over a dollar per watt. At 52 cents per watt, assuming similar cost reductions for installation and equipment such as inverters, solar power would cost six cents per kilowatt-hour in sunny areas of the U.S.—less than the average cost of electricity in the U.S. today. Solar power in sunny areas now costs roughly 15 cents per kilowatt-hour, according to the U.S. Department of Energy, although the cost can be sharply higher in small installations or in cloudy areas where solar installations generate less electricity.

The best way to reduce the cost per watt is to make solar cells more efficient—as a result, more power can be produced with a given amount of material and factory equipment. Increasing efficiency also decreases installation costs, since fewer solar panels are needed. But efficiency improvements aren't enough to reach 52 cents a watt. Manufacturers will also need to make solar cells from thinner silicon wafers, make wafers in a way that wastes less silicon, and speed up manufacturing. If a high-efficiency solar cell design slows down manufacturing or requires thick wafers, it likely won't lead to the necessary cost reductions.