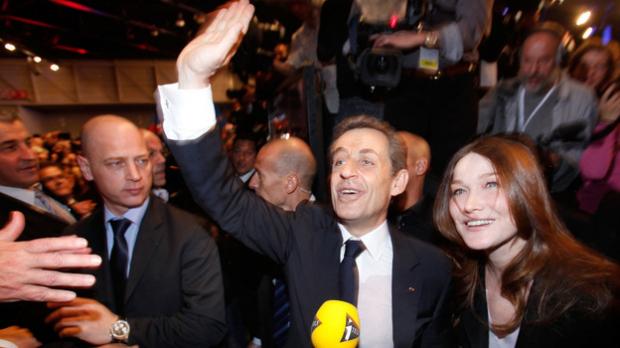 In the traditional world of French politics, spouses don't usually jump into the fray. But French first lady Carla Bruni Sarkozy is anything but a traditional political spouse.

Her husband, President Nicolas Sarkozy, has just announced he is running for re-election this spring. It's a challenge: Polls show him trailing the Socialist candidate, Francois Hollande.

Sarkozy's wife has promised to do everything she can to help her husband win — and that includes hitting the campaign trail.

It will be her first political campaign. Bruni married Sarkozy in 2007, just after he was elected and his second wife left him. In a rare interview with the BBC last fall, Bruni Sarkozy talked about their brief courtship.

"Walking around the garden of the Palais of the Elysee [the official residence of the French president], and he was giving me all these details about tulips and roses. And I said to myself, 'My God, I must marry this man,'" she recalled. "He's president and he knows everything about flowers as well. This is incredible."
But the French people were taken aback by the highly public, lightning-quick courtship between the supermodel-turned-pop singer and their hyperactive new leader. Many thought it wasn't fitting presidential behavior.