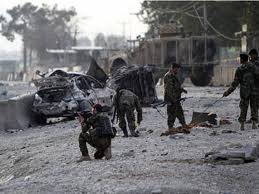 A suicide car bomber has struck at the gates of Jalalabad airport in eastern Afghanistan, officials said, killing nine people in an attack insurgents said was revenge for U.S. troops burning Qurans.

The early Monday explosion comes after six days of deadly protests in Afghanistan over the disposal of Qurans and other Islamic texts in a burn pit last week at a U.S. military base north of the capital.

American officials have called the incident a mistake and issued a series of apologies. Afghan President Hamid Karzai has urged calm, saying that Afghans should not let the insurgents capitalize on their indignation to spark violence.

Monday's attack appeared to be a sign that the Taliban are seizing the opportunity to do just that.

The bomber drove up to the gates of the airport which serves both civilian and international military aircraft shortly after dawn and detonated his explosives in a "very strong" blast, said Nangarhar provincial police spokesman Hazrad Mohammad.

Among the dead were six civilians, two airport guards and one soldier, Mohammad said. Another six people were wounded, he said.