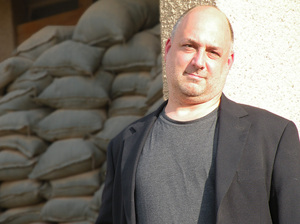 The halls of the State Department are haunted, not by actual ghosts, but by people who might as well be ghosts: whistleblowers, people who angered someone powerful and people who for one reason or another, can't be fired.

"People like me, that the State Department no longer wants, but for some reason can't or won't fire, are assigned to what we call 'hallwalking,'" says author Peter Van Buren.

Hallwalkers are stripped of their security clearances, their desks and their duties — left to wander aimlessly up and down the halls of that massive building. Sometimes they're required to show up in the morning to get paid; sometimes they're allowed to telecommute from home.

After 23 years in the Foreign Service, Van Buren joined the ranks of the hallwalkers last fall, when he published a scathing account of his year working on what he believed were wasteful reconstruction projects in Iraq.

The book is called We Meant Well: How I Helped Lose the Battle for the Hearts and Minds of the Iraqi People. Van Buren says all books published by State employees are subject to an approval process, and his book was no exception.

The Cold War Racket Never Ended for the U.S.