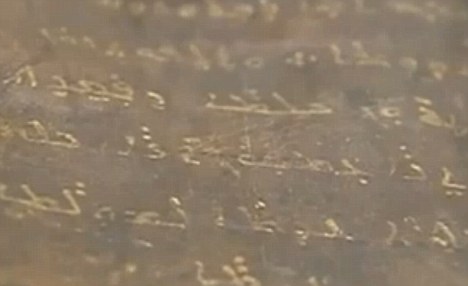 A secret Bible in which Jesus is believed to predict the coming of the Prophet Muhammad to Earth has sparked serious interest from the Vatican.

Pope Benedict XVI is claimed to want to see the 1,500-year-old book, which many say is the Gospel of Barnabas, that has been hidden by the Turkish state for the last 12 years.

The £14million handwritten gold lettered tome, penned in Jesus' native Aramaic language, is said to contain his early teachings and a prediction of the Prophet's coming

The leather-bound text, written on animal hide, was discovered by Turkish police during an anti-smuggling operation in 2000.

It was closely guarded until 2010, when it was finally handed over to the Ankara Ethnography Museum, and will soon be put back on public display following a minor restoration.

A photocopy of a single page from the handwritten ancient manuscript is thought to be worth £1.5million

Why SamFox! Your handle suggests to me Native American. I would have never guessed. Native American seems to often suggest "Great Spirit" that isn't quite within the Jesus realm.

SamFox, you are class A1.

Why SamFox! Your handle suggests to me Native American. I would have never guessed. Native American seems to often suggest "Great Spirit" that isn't quite within the Jesus realm.

SamFox, you are class A1.

Why SamFox! I would have never guessed. Your handle suggests to me Native American. And most of them seem to be caught up in some "Great Spirit" worship that isn't quite Jesus aligned.

You're the best, SamFox. Class A1.

I went to the site to "read the full story". After a few sentences it was easy to see it is a false gospel account. Jesus did claim divinity. His followers considered Him divine. The 1st verse of John's gospel says Yeshua [Jesus] was "With God and He was God".  Jesus claimed to be I AM a couple of times.

I AM being a name God used with Moses. I AM, the Self existent One.

The writing may be of hysterical significance & even have historical value, but it is not an authentic gospel of Yeshua Messiah.

When I repented of my sin & asked Jesus to forgive it & come into my life He proved in me that He is God. You can make fun all you want. But I know Him in Who I have believed & I know He can keep me.

He doesn't always hit my time frame, but He has never failed me.

Anyone wanting to check out the Bible can go to biblegateway.com. Great Bible website.