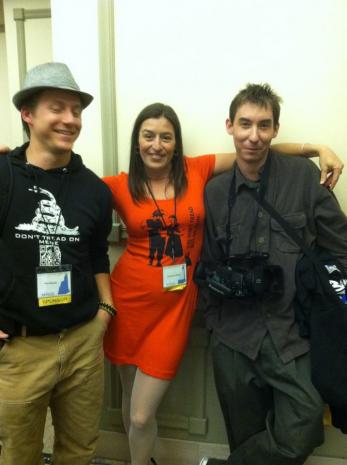 So there are these Dime Cards that you can buy now at Don’t Tread on Meme. These guys use the government’s own junk silver and package it with their own brands. It’s awesome cool!

If you have a brand that you want circulated through a particular market, I would recommend that you buy yourself a couple bags of junk silver (or go dig them up out of that geocash) and have Don’t Tread on Meme teach you how to manufacture Dime Cards.

If your goal is to penetrate a market with your brand, selling junk silver dimes that are individually packaged with your brand may be just the marketing medium you want. Imagine putting your logo, your slogan, your mission, your meme, your domain, your QR code… on MONEY… passed from hand to hand via mutual exchanges of value. What could be better than that?

But does the card actually add value to the dime?

I would say that it adds value in 3 ways. First it educates people that silver is money. Second it acts as a holder for the coin… meh. Third it creates the opportunity for enterprises to buy little billboards on units of exchange that will flow through society.

I contend that only people who are attracted to the meme on the card would pay higher than spot price for the silver dime. But more importantly, only people who want to spread a particular meme will actually allow that money to circulate.

Liberty geeks might want to collect all 21, or 47, or 1026 brands of dime cards that are created… but that does not mean that the silver will be circulating.

So I believe that for the idea to be a success, enterprises will have to swallow the price of dime card manufacturing and sell them at melt to people in the market that they wish to penetrate. Even then though we are still fighting Gresham’s Law…

From the Wikipedia: Gresham’s law is an economic principle that states: “When a government compulsorily overvalues one type of money and undervalues another, the undervalued money will leave the country or disappear from circulation into hoards, while the overvalued money will flood into circulation.” It is commonly stated as: “Bad money drives out good”, but is more accurately stated: “Bad money drives out good if their exchange rate is set by law.”

Who is going to spend silver while people are still stupid enough to take worthless paper? Answer; logical people will save silver and spend their paper as long as they can me thinks… which is about 10 more months. haha!

So yeah I realize that the Freedom’s Phoenix cadre are are gearing up for; D2Z ~ the day the dollar drops to zero. As Ernest Handcock repeats “I know where it goes from here.”

If they don’t spend they will show a friend! Marketers who start a dime card program should not fear dime card collectors taking the cards out of circulation. People who don’t spend them, obviously love them and will show them to a bunch of other people. And people who do not like them, will just spend them as quick as possible. So you can think of the journey of each dime card through the market place as a trip to the person who appreciates them most.

Another thing to think of is your initial investment per unit; dime plus cost of manufacturing is 3 or 4 bucks. But if you lock in the price of silver now buy buying your bag of dimes, you may not mind selling off the cards at the market melt price when your input costs are dwarfed by the meteoric rise of the price of silver that Douglas Casey predicts.

But what if you don’t want to be in the business of selling dimes and you think that at 3$ per unit they are a little pricey to be giving away. Shire Silver has a very similar product to dime cards only Ron Helwig uses flat silver strips or gold wire to measure out units of bullion as small as 1/2 a gram. With the Shire Silver method you can make a little billboard on real money for your brand for as little as 1$ per unit.

Now just give them away to people in your target market and let the magic of branded money happen.

I have heard it said that the silver in Don’t Tread on Meme Dime Cards has an advantage over Shire Silver because it is more recognizable as a government issued silver coin. But I don’t really think the average Joe has much of a clue about either unit. Education is needed for both.

I think that both the Shire Silver method and the dime cards will outperform other means of marketing a brand including direct mail that goes strait in the garbage, or TV commercials that everyone fast forwards through… and emails that people seldom open…

I personally can not wait until us freedom engineers have a product or service ready to launch. We will absolutely be putting our brand on a little billboard on real money and watching it go and go and go along spreading our meme.