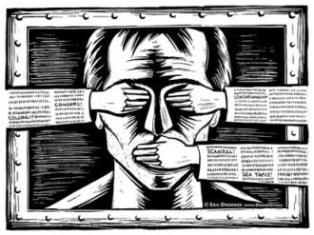 Exclusive: By obsessing over Iran gaining a nuclear weapon “capability” – even with no actual bomb – while ignoring Israel’s undeclared nuclear arsenal, the U.S. news media proves the point of its own bias. There’s also the usual hostility toward dissenting voices, as ex-CIA analyst Ray McGovern notes.


When CNN interviews a U.S. Army corporal preparing for his third deployment to Afghanistan, should TV viewers be permitted to hear him out on a front-burner issue like Iran’s alleged threat to Israel? For those who might think so, watch what happens when 28-year-old Cpl. Jesse Thorsen touches a neuralgic nerve by suggesting that Israel can take care of itself.

It’s impossible to say exactly what happened to the remote feed that suddenly got lost in transmission back to CNN Central, but the minute-long video is truly worth a thousand words
The interview, which dates back to Jan. 3 when the Iowa caucuses were the evening’s big news, is at least symbolic of how our Fawning Corporate Media treats dissident voices that clash with the prevailing pro-war-on-Iran bias. I missed the segment when it aired, but I think it still merits comment today as war clouds thicken, again.