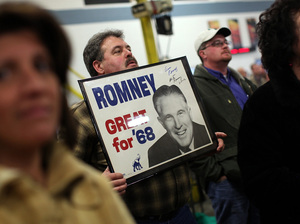 Michigan and Arizona hold presidential primaries Tuesday, and in Michigan, where Mitt Romney was born, the race has been as hard fought as anywhere in the country.

For Romney, the campaign there has been personal. He often evokes the Michigan of his youth, when his father, George, ran American Motors and went on to become a very popular three-term governor.

But does that family legacy mean anything today?

If you were to go to a Romney event in Detroit or Kalamazoo or Traverse City, you'd be almost guaranteed to hear some Romney family history.

"When dad ran for governor in 1962, I went in a little Ford van and I was not 16 yet, so there was another guy with me that drove," Romney said at a recent event. "We went from county fair to county fair; I think we visited that year all  83 Michigan counties."

In modern Michigan politics, George Romney looms large. He was an innovative auto executive who helped lead a movement to rewrite the state constitution and modernize state government. Eventually, he became governor.

Romney, one of the 3 big govt stooges with Rick & Newt.