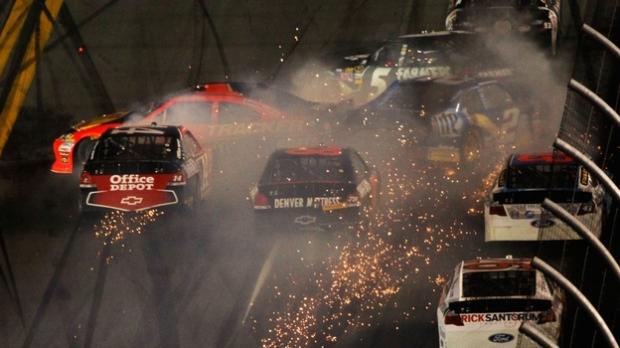 There was rain, fire, soap suds and fog in the most bizarre Daytona 500 in history.

When it was all over, Matt Kenseth was the only sure thing.

It wasn't even close.

Kenseth capped a crazy 36 hours for NASCAR by winning the first postponed Daytona 500 in 54 editions of the marquee event. He held off Dale Earnhardt Jr. and Roush Fenway Racing teammate Greg Biffle over a two-lap overtime finish in a race that was scheduled to begin Sunday afternoon but ended in the early morning hours Tuesday.

"We had a really fast car and have fast cars in the past, and I figured out a way to mess it up," Kenseth said. "I am glad it all worked out."

It did for Kenseth, who picked up a second Daytona 500 title to go with his 2009 victory at the end of a wild SpeedWeeks. All three of NASCAR's national series races went to overtime, with unknown winners picking up the victories in the Nationwide and Truck Series.

And after a wild Daytona 500 that took more than 36 hours to complete, the teams were stranded in Daytona another night: bad weather in North Carolina closed the airports at home.