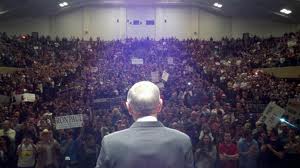 EAST LANSING — It seemed like a fair trade for an 11th-hour campaign stop in another state where polls indicate Republican presidential candidate Ron Paul likely will finish out of the money in today’s Michigan primary.

For almost an hour Monday afternoon, the Texas congressman showed the people his familiar, libertarian-flavored way of the wilderness. In exchange, the overflow crowd at the 3,700-seat Michigan State University Auditorium showed him the love.

Paul walked onto the stage to a 40-second standing ovation. His standard-stump-speech call for dismantling federal government as it has been known for at least two generations drew applause, cheers and chants — “President Paul, President Paul” primarily.

References to government programs and policies in disfavor with Paul and with the crowd — the Patriot Act, for example — generated rounds of on-cue booing.

“Enough is enough,” Paul said about the loss of civil liberties, drawing another prolonged standing ovation.