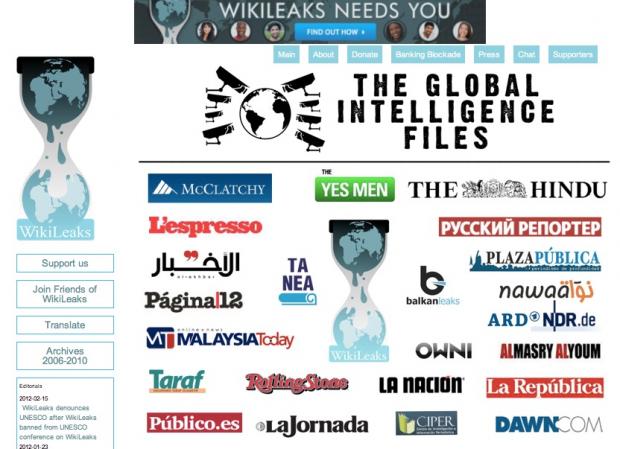 LONDON—Today, Monday 27 February, WikiLeaks began publishing The Global Intelligence Files – more than five million emails from the Texas-headquartered "global intelligence" company Stratfor. The emails date from between July 2004 and late December 2011. They reveal the inner workings of a company that fronts as an intelligence publisher, but provides confidential intelligence services to large corporations, such as Bhopal’s Dow Chemical Co., Lockheed Martin, Northrop Grumman, Raytheon and government agencies, including the US Department of Homeland Security, the US Marines and the US Defense Intelligence Agency. The emails show Stratfor’s web of informers, pay-off structure, payment-laundering techniques and psychological methods, for example :

"[Y]ou have to take control of him. Control means financial, sexual or psychological control... This is intended to start our conversation on your next phase" – CEO George Friedman to Stratfor analyst Reva Bhalla on 6 December 2011, on how to exploit an Israeli intelligence informant providing information on the medical condition of the President of Venezuala, Hugo Chavez.

The material contains privileged information about the US government’s attacks against Julian Assange and WikiLeaks and Stratfor’s own attempts to subvert WikiLeaks. There are more than 4,000 emails mentioning WikiLeaks or Julian Assange. The emails also expose the revolving door that operates in private intelligence companies in the United States. Government and diplomatic sources from around the world give Stratfor advance knowledge of global politics and events in exchange for money. The Global Intelligence Files exposes how Stratfor has recruited a global network of informants who are paid via Swiss banks accounts and pre-paid credit cards. Stratfor has a mix of covert and overt informants, which includes government employees, embassy staff and journalists around the world.

The material shows how a private intelligence agency works, and how they target individuals for their corporate and government clients. For example, Stratfor monitored and analysed the online activities of Bhopal activists, including the "Yes Men", for the US chemical giant Dow Chemical. The activists seek redress for the 1984 Dow Chemical/Union Carbide gas disaster in Bhopal, India. The disaster led to thousands of deaths, injuries in more than half a million people, and lasting environmental damage.

Playing Chicken With the Fates