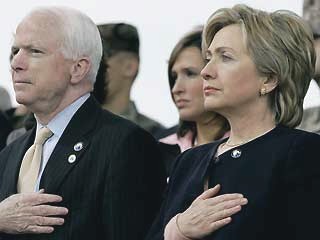 The international debate over whether to arm opposition fighters in Syria remains at “an early stage,” Secretary of State Hillary Rodham Clinton said Tuesday, adding that “there’s no plan that we can point to.”

Clinton told the Senate Foreign Relations committee that Syria offers “a more difficult and complicated set of circumstances” than Libya, where NATO and several Arab countries directly intervened, providing supplies and training for opposition forces during the uprising that eventually led to the overthrow and death of Moammar Gaddafi.

Is Democracy Versus Autocracy the New Cold War?

Breaking the Empire Means Breaking With the Saudis

Luongo: Breaking The Empire Means Breaking With The Saudis

Report: Taliban Offered Biden Control of Kabul, but He Declined

The Evil and Cynicism of Federal Foreign "Donations"

The Evil That Men Do Lives After Them

I watch the desperate Afghans wade in the sewage as hope fades... and tears fall: Sky News'...

We Are Witnessing Incompetence On A Colossal Scale Throughout Our Society

The Afghanistan Exit Debacle: Incompetence, Distraction Or Something More Sinister?