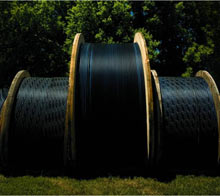 Citizens in Chattanooga, Tennessee, have access to one-gigabit-per-second Internet—that's 100 times the U.S. national average, and fast enough to download a two-hour movie in about five seconds. The only question is: what to do with it?

The city is hoping a contest with $300,000 in prize money will help answer that question. Entrants are invited to come up with clever ways of making use of the city's blisteringly fast Internet, which was installed in late 2010 with a $111 million U.S. Department of Energy grant, as part of federal stimulus efforts that also built out the city utility's long-planned smart grid.

Some early entries include health-care applications, such as transferring larger files like CT scans in real-time so that specialists can serve a larger area. Ideas contributed by students include a platform for high-definition video debates, and international collaborations with students in Sri Lanka, London, Jamaica, and elsewhere.

But even if some great ideas come out of the contest, the fact remains that most people in the U.S. still have access to only relatively slow Internet connections. Late last year, the United States ranked 25th in the world for average available Internet speed. By the end of this year, South Korea, a world leader in Internet speed, will provide one-gigabit service nationwide for about $27 a month.