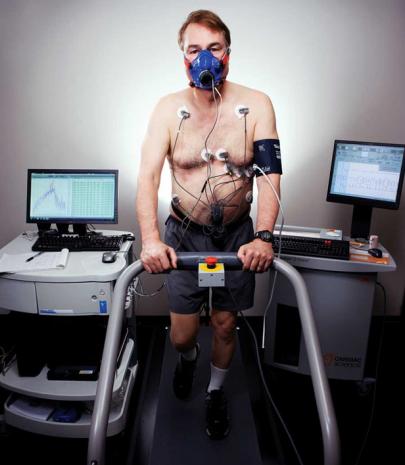 Back in 2000, when Larry Smarr left his job as head of a celebrated supercomputer center in Illinois to start a new institute at the University of California, San Diego, and the University of California, Irvine, he rarely paid attention to his bathroom scale. He regularly drank Coke, added sugar to his coffee, and enjoyed Big Mac Combo Meals with his kids at McDonald's. Exercise consisted of an occasional hike or a ride on a stationary bike. "In Illinois they said, 'We know what's going to happen when you go out to California. You're going to start eating organic food and get a blonde trainer and get a hot tub,' " recalls Smarr, who laughed off the predictions. "Of course, I did all three."

Smarr, who directs the California Institute for Telecommunications and Information Technology in La Jolla, dropped from 205 to 184 pounds and is now a fit 63-year-old. But his transformation transcends his regular exercise program and carefully managed diet: he has become a poster man for the medical strategy of the future. Over the past decade, he has gathered as much data as he can about his body and then used that information to improve his health. And he has accomplished something that few people at the forefront of the "quantified self" movement have had the opportunity to do: he helped diagnose the emergence of a chronic disease in his body.

Like many "self-quanters," Smarr wears a Fitbit to count his every step, a Zeo to track his sleep patterns, and a Polar WearLink that lets him regulate his maximum heart rate during exercise. He paid 23andMe to analyze his DNA for disease susceptibility. He regularly uses a service provided by Your Future Health to have blood and stool samples analyzed for biochemicals that most interest him. But a critical skill separates Smarr from the growing pack of digitized patients who show up at the doctor's office with megabytes of their own biofluctuations: he has an extraordinary ability to fish signal from noise in complex data sets.

WHEN YOU ENJOY BEING ALONE - Jordan Peterson (Best Motivational Speech)