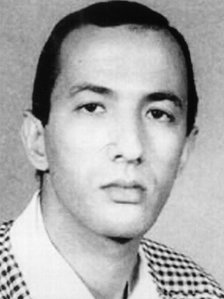 He was detained after arriving in the capital on a flight from Pakistan.

Officials told state media they knew he was intending to hand himself in, and that his real name, Mohammed Ibrahim Makkawi, was on the passenger list.

The former Egyptian army colonel was once Osama Bin Laden's security chief and is wanted by the US for the 1998 embassy bombings in East Africa.

He was also suspected of training Somali fighters who killed 18 US servicemen in Mogadishu in 1993, and some of the 11 September 2001 hijackers.

Saif al-Adel is on the FBI's most-wanted list and the US has offered a $5m reward for information leading to his capture or death.

Security officials told the Egyptian state news agency Mena that Saif al-Adel was detained at Cairo International Airport as he arrived on Wednesday, after flying to Egypt from Pakistan via Dubai.

The officials said they had received information about his plans to return to Egypt and hand himself over the authorities.

All flights from Asia were monitored as he was expected to come from either Afghanistan or Pakistan, and eventually his name was spotted on the passenger list of an Emirates Airline flight, they added.