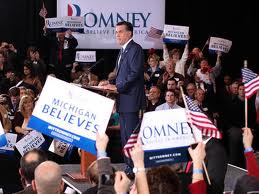 The victories will provide an important boost for Romney, a former Massachusetts governor who has sought to cast himself as the GOP’s inevitable nominee. He has now won primary contests in six states: New Hampshire, Florida, Nevada, Maine, Michigan and Arizona.

“We didn’t win by a lot, but we won by enough. And that’s all that counts,” Romney told supporters Tuesday night in the Detroit suburb of Novi.

He said nothing about Santorum in his speech, instead criticizing President Obama at length and trying to boil down a complicated economic message.

Santorum and former House speaker Newt Gingrich (Ga.) have won a total of five states. On Tuesday night, Santorum cast the close outcome in Michigan as a sign of success, noting that it came in Romney’s “back yard.”

“A month ago, they didn’t know who we are, but they do now,” Santorum told supporters in Grand Rapids. “The people of Michigan looked into the hearts of the candidates, and all I have to say is ‘I love you back.’ ”

Santorum avoided the kind of incendiary rhetoric that has drawn criticism in recent days — including an attack on Obama for suggesting that young people should go to college. Instead, Santorum talked about small government and praised the women in his family for their hard work at home and in their careers. He spoke about how his mother had gone to college and received at least one advanced degree.

Romney’s victories on Tuesday are unlikely to solve the larger problems that have held back his campaign. Even after months of work and millions of dollars spent, he has not won over a vast swath of Republicans.

That was clear from Michigan exit polls, which showed that Santorum had beaten Romney decisively among important Republican blocs. The former senator from Pennsylvania held a 15-point lead among voters who identify themselves as “very conservative,” a 40-point edge among those who say they want their candidate to be “a true conservative” and a 41-point advantage among those who want a candidate with “strong moral character.”

Romney, by contrast, bested Santorum among voters who care strongly about beating Obama in November, and among those who say the economy is their chief concern.

He may have been helped by Santorum’s strident stands on social issues in recent days. The former senator called Obama a “snob” for wanting young people to attend college and said that he almost vomited after reading a speech by John F. Kennedy about the separation of church and state. Santorum later said he wished he could take back that statement.

Among his fellow Catholics, Santorum lost to Romney by 43 percent to 37 percent, according to exit polls.