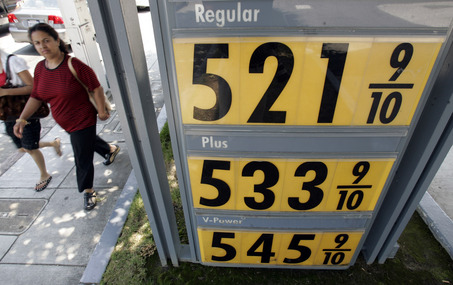 Could oil expert John Hofmeister's prediction of $5 gas in 2012 be too low? As tensions continue to mount over Iran's nuclear program, some analysts say . . . well, maybe.

The first two weeks of February already have seen a surprising 18-cent jump in fuel pump prices according to petroleum Lundberg Survey, which charted a national average of $3.69 on Friday.

The online user-generated research group GasBuddy reported a slightly better national average at $3.65 per gallon with Houston clocking in at $3.54 — increases of 31 and 33 cents, respectively, from this time last year.

"People may think we're reporting that the sky is falling, but you can't rule out any of these things happening," petroleum analyst Gregg Laskoski says about current Iran-Israel tensions.

In line with much of Hofmeister's worries about unstable geopolitics, GasBuddy analyst Gregg Laskoski tells CultureMap that the current strife in the Middle East could push gasoline prices considerably higher than $5 a gallon.

"The wild card is that we don't know when or if there will be a peaceful resolution between Israel and Iran," he says. "Secretary of defense Leon Panetta believes there's a better than a 50 percent chance an [Israeli] attack could happen this April, May, or June."

Laskoski warned that a military dispute of this magnitude could spike crude oil prices as high as $200 a barrel. Based on petroleum industry estimates, the cost increase would add $2.50 to existing gasoline prices, which would top them off well above $6 a gallon.

"People may think we're reporting that the sky is falling, but you can't rule out any of these things happening," he says. "Prices this high could be a tremendous catastrophe for the American economy."

2 Comments in Response to Forget $5 gas, the new worry is $6 gas

Increase in the price of food and consumables as a result of $5-6 gas a gallon is not the worse part to worry about. It is STAGFLATION where there is a run-away inflation while the rate of unemployment shoots up sky-high in a stagnant economy.

You are back to that dangerous Stagflation in the early 1970s created by OPEC’s greed for profit. Member-countries of the organization caballed to manipulate the supply of crude oil. It was gradually "rationed" within a staggered timetable and in such smaller quantity, just enough to skim more profit from buyers in the market.

The cause of the increase of gas prices is usually artificial. It creates a chain of sweeping reactions -- triggering skyrocketing prices in the market. This is the result when greedy profiteers that are in the position to manipulate supply and demand suddenly go berserk. No law or regulations can prevent it. We are at the mercy of profiteers!

Natural disasters are hardly the cause of this kind of economic problem. Even if the law of supply and demand is disrupted by force majore, the opportunity to make a profit out of it is always the driving force that creates a worldwide economic catastrophe.

And that is what we should worry about.

This has an immediate effect on increasing grocery prices as transportation prices for food and other consumable commodities (like clothing) require frequent transportation to replenish supplies on the shelves.  Even the UPS and FedEx may have to implement a fuel surcharge.  Enjoy!