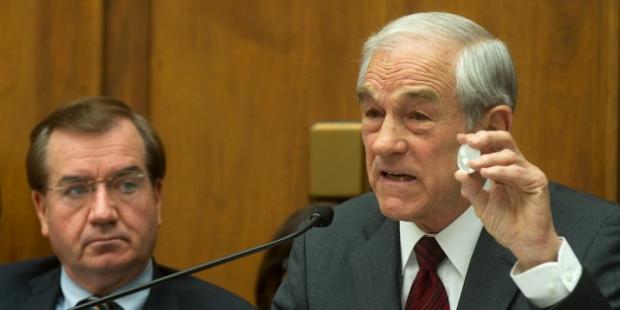 GOP presidential candidate Ron paul took a break from campaigning today and diverted his attention back to his role on the House Financial Services Committee with the semiannual visit of Federal Reserve chairman Ben Bernanke.

In a scathing opening statement, Paul went on the offensive against the Fed:

“What we are witnessing today is the end stages of a grand experiment,” Paul said, adding that the Fed’s control over the nation’s money supply has directly caused economic bubbles and all but destroyed the purchasing power of the dollar.

Noting that the Fed will soon end because it is facilitating too much debt, the Congressman added “I’m anxiously waiting for this day… Reform has to come.”

Turning his attention to Bernanke, Paul asked the Fed chairman whether he did his own grocery shopping. A somewhat bemused Bernanke replied in the affirmative, to which Paul hit back “OK. So you’re aware of the prices,” before commenting on government denial of real levels of inflation.

“This argument of prices going up two percent, nobody believes it.” Paul said. “The old CPI says prices are going up at nine percent.”

The FBI, the FED, and 87,000 Armed & Dangerous Extortionists