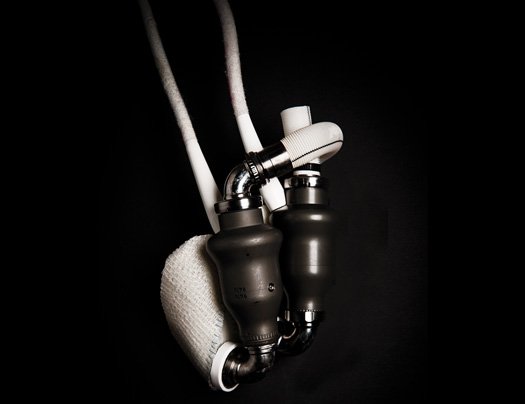 Meeko the calf stood nuzzling a pile of hay. He didn’t seem to have much appetite, and he looked a little bored. Every now and then, he glanced up, as though wondering why so many people with clipboards were standing around watching him.

Fourteen hours earlier, I’d watched doctors lift Meeko’s heart from his body and place it, still beating, in a plastic dish. He looked no worse for the experience, whisking away a fly with his tail as he nibbled, demonstrably alive—though above his head, a monitor showed a flatlined pulse. I held a stethoscope to his warm, fragrant flank and heard, instead of the deep lub-dub of a heartbeat, what sounded like a dentist’s drill or the underwater whine of an outboard motor. Something was keeping Meeko alive, but it was nothing like a heart.

As many as five million Americans suffer some form of heart failure, but only about 2,000 hearts a year become available for transplant. The obvious solution to that scarcity is to build an artificial heart, and how hard could that be? The heart’s just a pump, after all, and people have been making pumps since the Mesopotamians invented the shadoof to raise river water 3,000 years before the birth of Christ. Doctors started thinking seriously about replacing the heart with a machine around the time Harry Truman was president.

To understand why they still haven’t succeeded, pick up a two-pound barbell and start curling it. Two pounds: nothing. But see how long you can keep it up. Twenty minutes? An hour? Two? Your heart does that all day and all night—35 million beats a year—for as long as you live, without ever taking a rest. Manufacturing a metal and plastic heart capable of beating that way for more than about 18 months has so far proved impossible.

The problem is the “beating” part. Among the first to envision an artificial heart was, amazingly, the ventriloquist Paul Winchell. When not in front of a TV camera manipulating his dummies Jerry Mahoney and Knucklehead Smiff, Winchell was developing patents, some 30 in all, including one for an artificial heart that he invented with Dr. Henry Heimlich, of the eponymous anti-choking maneuver. Back then, and up through the famous Jarvik-7—the first machine to replace a human heart, in 1982, albeit briefly—inventors could only imagine imitating the heart’s lub-dub. That is, they envisioned filling a chamber with deoxygenated blood returning from the body and pumping it out to the lungs to be infused with oxygen—lub—and then drawing that good red blood back into a second chamber and pumping it back out to the body—dub.