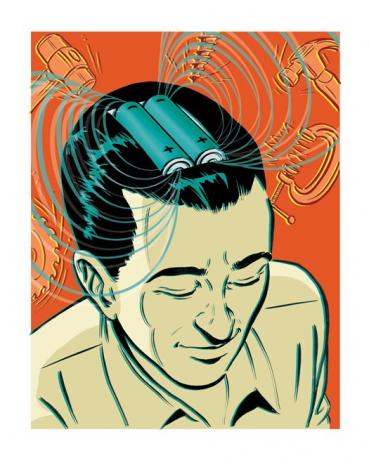 My first migraine arrived in a fuzzy cloud of reds and purples, a stab of pain that left me bent over in the back of an auto-rickshaw, squinting and nauseous, on my morning commute to Connaught Place, in New Delhi. Months later, when I left India, I thought that the headaches would disappear along with the chaos of the overcrowded capital. They didn’t. And finally, after months spent stumbling into my room, drawing the curtains, and lying in the darkness for hours wishing for sleep, I went to an internist, who prescribed a brain scan. When he found nothing, he told me what I already suspected: migraines. I asked him the cause, but all he could say was, “Stress, probably, which can mean any number of things.”

It was an unsatisfying answer, but accurate—36 million Americans suffer from migraines, and no one knows why. In the seven years since my diagnosis, neurologists have come closer to understanding how migraines work. Last summer at a conference, David Dodick, a neurologist at the Mayo Clinic in Arizona and the president of the American Headache Society, explained that the thalamus, the region of the brain responsible for sensory information and sleep cycles, was “acting as a sort of railway station to transmit migraine pain to pain receptors throughout the brain.” Scientists have also developed a treatment for migraines in which a tiny subcutaneous battery is wired to the patient’s spine to deliver small pulses of electricity to the thalamus. The method, which falls under a broad range of treatments called neurostimulation, seems to derail the thalamus’s pain transmissions during a migraine.

WHEN YOU ENJOY BEING ALONE - Jordan Peterson (Best Motivational Speech)