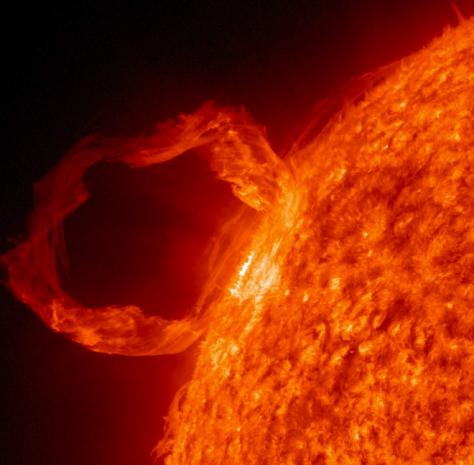 The Earth has a roughly 12 percent chance of experiencing an enormous megaflare erupting from the sun in the next decade. This event could potentially cause trillions of dollars’ worth of damage and take up to a decade to recover from.

Such an extreme event is considered to be relatively rare. The last gigantic solar storm, known as the Carrington Event, occurred more than 150 years ago and was the most powerful such event in recorded history.

That a rival to this event might have a greater than 10 percent chance of happening in the next 10 years was surprising to space physicist Pete Riley, senior scientist at Predictive Science in San Diego, California, who published the estimate in Space Weather on Feb. 23.

“Even if it’s off by a factor of two, that’s a much larger number than I thought,” he said.

Earth’s sun goes through an 11-year cycle of increased and decreased activity. During solar maximum, it’s dotted with many sunspots and enormous magnetic whirlwinds erupt from its surface. Occasionally, these flares burst outward from the sun, spewing a mass of charged particles out into space.

Small solar flares happen quite often whereas very large ones are infrequent, a mathematical distribution known as a power law. Riley was able to estimate the chance of an enormous solar flare by looking at historical databases and calculating the relation between the size and occurrence of solar flares.