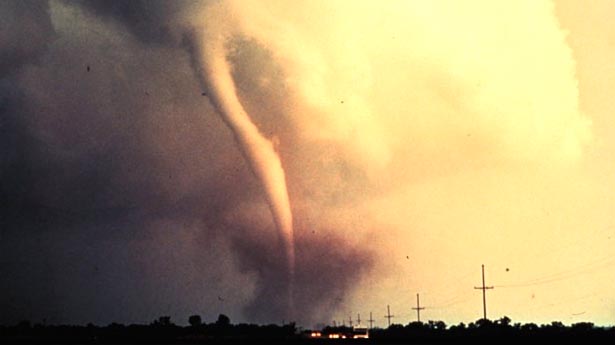 A massive winter storm unleashed a string of tornadoes that cut a swath of destruction across the US midwest, killing at least nine people and threatening scores more as it pushed eastward Wednesday.

The town of Harrisburg, Illinois was ripped apart by a deadly twister that stayed on the ground for miles, striking while most were still sleeping at around 4:30 am (10:30 GMT.)

Homes were smashed to bits, cars were tossed into lakes, huge trees were torn from ground, a strip mall was ripped to rubble and a wall was torn off the local hospital.

At least six people were killed and more than 100 injured in this southern Illinois town of 9,000.

The monster twister packed winds up to 170 miles (270 kilometers) per hour and damaged or destroyed up to 300 homes and 25 businesses.

“A lot of the houses are unreal, it’s like a war zone,” fire chief Bill Summers told reporters.

Rescue crews were digging through the rubble to search for survivors, but Summers said that by late afternoon all those who had been reported missing had been accounted for.

How We Destroy the Colorado River

In a drying world can humans learn to adapt?

WEF Calls for an End to Private Car Ownership

Free-Roaming Cats Could Be An Environmental Menace

40 Million in US West Without Water in 2023 – Dane Wigington

Another Alaskan Oil Project Could Be Shelved Over Environmental Concerns