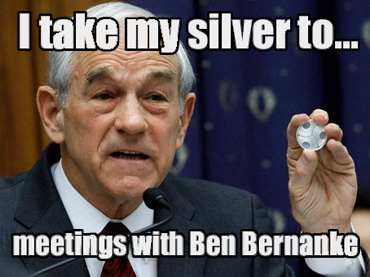 For immediate release 03-01-12 Contact: Megan Duffield, megan@lineplot.com | 617-864-8300 x122 This is no handy working of Photoshop. During Ben Bernanke’s testimony to the Committee on Financial Services yesterday, Congressman Ron Paul responded to the Chairman’s typical Keynesian explanations by showing the world and Congress what real money is. While speaking, Ron Paul lifted up a shiny, one troy ounce Silver Circle from the upcoming, Boston based film: Silver Circle. News sources everywhere including Forbes, and many from the liberty community, ran with the story. However the round was mentioned many times incorrectly. Some referred to it as an “American Eagle” and others a “Buffalo”. We are here to set the record straight. Ron Paul laid the sound money smack down on Bernanke by showing him a Silver Circle Round from the film hitting theaters this August. We gave Ron Paul a one-ounce round last January when we met him in Houston, TX at a Ludwig Von Mises event. He must

Article 1. Section. 10. US CONSTITUTION
Gold and Silver are the only real money.

No State shall enter into any Treaty, Alliance, or Confederation; grant Letters of Marque and Reprisal; coin Money; emit Bills of Credit; make any Thing but gold and silver Coin a Tender in Payment of Debts; pass any Bill of Attainder, ex post facto Law, or Law impairing the Obligation of Contracts, or grant any Title of Nobility.


This headline came from an underground source. It is misleading. The "silver circle" is as old as the face of the politician holding it in front of the camera. It symbolizes his ignorance of Economics. He called gold and silver "money". These are not. It is purely street economics.

I monitored this congressional hearing with keen interest. Ron Paul was not asking questions IN AID OF LEGISLATION – he was LECTURING Dr. Bernanke, Chairman of the Federal Reserves with a Ph.D. in Economics and today the nation’s top mind in fiscal and monetary economics. He was lecturing the Chairman with his street Economics!

This news headline you are reading now came from Ron Paul’s website, viz.: Ron Paul and Fed Chairman Agree to Discuss Competing Currencies. It is an attempt to elevate Ron Paul into the same level of knowledge of "competing currencies" that Dr. Bernanke has, which Ron Paul doesn’t have!

This news headline you are reading now came from Ron Paul’s website, viz.: It is an attempt to elevate Ron Paul into the same level of knowledge of "competing currencies" that Dr. Bernanke has, which Ron Paul doesn’t have!

Having been exposed to this esoteric Science of Economics in graduate school myself where Dr. Bernanke came from, I can understand how difficult it was for Dr. Bernanke to make Ron Paul understand that what the Congressman was talking about was NOT economics.

Listen to the video while Ron Paul is lecturing Dr. Bernanke of his own home-made economics. He was telling the Fed Chairman that severe "rising prices is not inflation" [of course it is]. "Gold and silver are money" [of course they are not] … that the rates of inflation going on now can be negotiated and compromised [as if it is something that is subject to contract (compromise} – Ron Paul at 9%, Bernanke at 2%, negotiated to be in the middle in-between at 5% in Ron Paul’s proposal. To stop wasting his time, Bernanke tried to humor Ron Paul by telling him that they should discuss this later. Ron Paul was happy, his ignorance spared from being exposed any further.

Now you guys out there whose bread and butter is Economics – in this CONGRESSIONAL HEARING, how could you tell Ron Paul as politely as you can that his knowledge of Economics is nonsense and annoying without being cited for contempt?

Way to go!  I had seen the video and wondered what one ounce he chose to hold up.   I had secretly wished it was a Freedom's Phoenix round, but I have to laugh when I see that still.  Bernanke is clueless as to what it means.  Hopefully he will be trying to get "Silver Circle" banned in a few months.  Nothing like a publicity chairman who works for free.

A New Gold Standard? Kremlin Confirms Intention To Back Ruble With Gold And Commodities

It Is "Just A Matter Of Time" Before Gold Rises 5x Or More: Lawrence Lepard

France Has Repatriated All Its Monetary Gold

The Failure Of Fiat Currencies & The Implications For Gold & Silver

This is MY precious metal plan for prepping and SHTF...What is your metal plan?

The Facts of Gold Confiscation: The Saga Continues...

The Facts of Gold Confiscation: The Saga Continues...