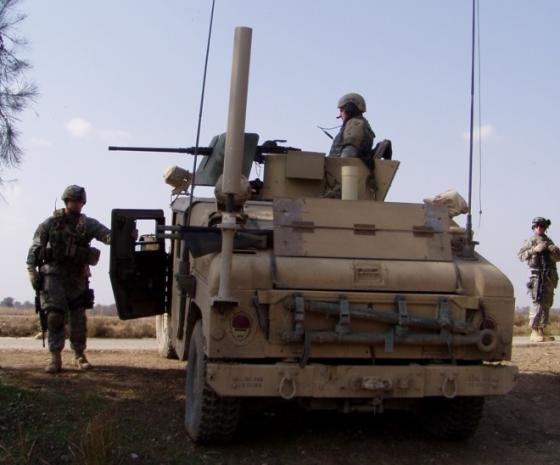 On Jan. 7, someone strolled into a supply room at Camp Eggers, a coalition base near the U.S. embassy in downtown Kabul, pocketed two sets of car keys and walked out undetected. Sometime over the next 24 hours, the thieves drove away with two black-painted, armored Toyota Land Cruisers belonging to the U.S. Army’s 26th Maneuver Enhancement Brigade, a unit that escorts coalition personnel around Kabul.

The loss of the Land Cruisers is bad enough. But what’s really got the Army worried is what was inside the vehicles: two sets of top-secret Duke radio frequency jammers used to block the signals that detonate remote-controlled improvised explosive devices. In a notice posted to the website of the Army’s Criminal Investigative Command (and first noted by Military Times), investigators plead for anyone with knowledge of the theft to contact CID offices in and around Kabul.

If the Army suspects who might be responsible, it’s not saying. Equally, it’s not clear if the bandits were after the Duke equipment specifically, or if the Land Cruisers were the sole target and the jammers were simply bonuses.

Best case scenario: the thieves have no ties to insurgents and no appreciation of the jammers’ value … and the high-tech devices wind up in a scrap heap somewhere.

Worst case: the jammers wind up in the hands of insurgents who then reverse-engineer them to create some kind of counter-counter-measure, thus making already-deadly IEDs even more dangerous.