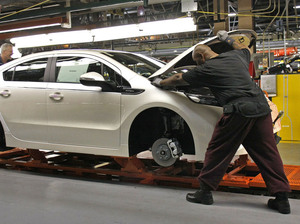 A GM spokesman said Friday that the company will shut down production of the Volt from March 19 until April 23, idling 1,300 workers at the Detroit-Hamtramck assembly plant.

"The fact that GM is now facing an oversupply of Volts suggests that consumer demand is just not that strong for these vehicles," said Lacey Plache, chief economist for auto information site Edmunds.com.

Lee said a decision to allow Volt drivers to use carpool lanes in California should help demand. "We're just looking to increase sales, and we see a positive trend going forward," he said.

Buckle Up! It's All Crashing Now By DESIGN!

When a Train Wreck Is No Accident