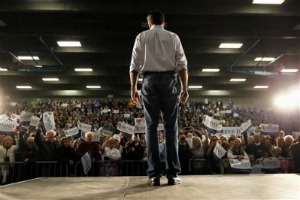 The Republicans want to make the presidential race about values, which they define as returning the nation to Victorian morality, laissez faire economics and a heavy dose of conservative Christian theology.

As Mitt Romney, Rick Santorum and Newt Gingrich compete for conservative Republican votes, they have subjected us to rehashing long-settled issues, such as contraception, abortion and in Santorum’s case, separation of church and state, stay-at-home moms and the worth of higher education.

(My apologies for not listing Ron Paul, the only anti-war candidate, but I don’t think he will win the Republican presidential nomination.)
Even more depressing are the Romney, Santorum and Gingrich plans for the future, as best illustrated by Romney, the current favorite to win the Republican nomination after his victories in the Michigan and Arizona primaries.

We are divided and racing to a conflict that we can't solve ourselves. Politicians are clueless.

Dr. Mercola: Patrick Wood On The Pressing Dangers Of Technocracy