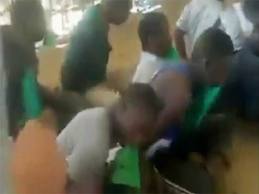 A shocking video has appeared on the Internet showing Libyan rebels torturing a group of black Africans. People with their hands bound are shown being locked in a zoo-like cage and allegedly forced to eat the old Libyan flag.

­“Eat the flag, you dog. Patience you dog, patience. God is Great,” screams a voice off-camera in the video uploaded to YouTube last week, which also made its way onto LiveLeak.com.

The torturers are also shown making the group of captive black Africans stand up with pieces of green cloth still in their mouths and apparently forcing them start jumping.

A number of people are shown standing outside the cage watching the atrocity.

After Muammar Gaddafi was killed, hundreds of migrant workers from neighboring states were imprisoned by fighters allied to the new interim authorities.

They accuse the black Africans of having been mercenaries for the late ruler.