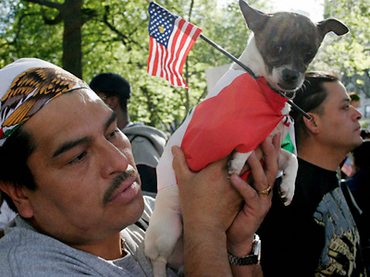 Candidates continue to fetch on all fours for votes as they gear up for November, but they will have to try their doggone hardest to win the support of one unlikely ballot caster.

His name is Buddy, and getting his vote is going to be especially ruff.

Buddy might be undecided on which way he’ll be leaning this Election Day for now, but throw him a bone and you might get his vote. Buddy is a dog. A four-legged, floppy-eared, collar-wearing pooch that, in Albuquerque, New Mexico, is now registered to vote.

The pup’s owner says he had no problem signing up Buddy to cast a ballot. To KOB Eyewitness News, he says he approached a voter registration booth at the University of New Mexico campus a few weeks ago and wondered if it would be easy to add Buddy’s name to the roster of voters.

To his surprise, it didn’t require that much hounding. Buddy is now a registered voter.