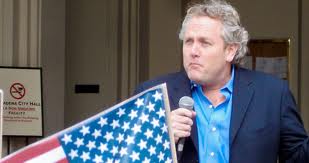 The footage that Andrew Breitbart planned to release just hours after his untimely death would have proven hugely damaging to President Obama’s re-election hopes, because it shows Obama fraternizing with Weather Underground terrorists whose goal it was to set up a Communist dictatorship inside the United States.
According to former FBI agent Larry Grathwohl, who was assigned to infiltrate the Weather Underground’s Central Committee, the organization run by Bill Ayers carried out bombings targeting the Pentagon, the State Department, as well as police stations and federal buildings, in an attempt to cause the United States government to collapse and open the door for Cuban, North Vietnamese, Chinese and Russian troops to occupy the country.
Grathwohl stated that Ayers and his group planned to deal with Americans who would try to resist this takeover by “establishing re-education centers in the south-west”. Asked what he would do with those who still refused to convert to communism, Ayers said that they would have to be “eliminated,” as in 25 million Americans would be killed in concentration camps.