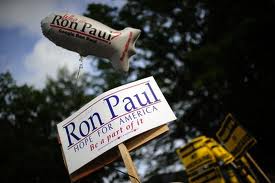 That's what they do in the Safari -- aim a tranquilizer gun at a berserk Elephant [obviously Republican], and fire! I always cross my fingers that they don't hit the reproductive "tool" of that Elephant. If they do, that Elephant would have no more desire to live ... he is good as dead!

Reports have it that there are some Ron Paul people in the crowd who no longer want to listen to him delivering speeches in order to minimize attacks of hostile opponents who call him a candidate from the "lunatic fringe". Here is the irony: In the earlier part of his incarceration, Charles Manson used to deliver speeches in his cell. Cellmates love to hear him talk about his version of "social engineering" to change America... down with fascist policemen, kill politicians, abolish this, abolish that, so forth and so on. When he gets carried away and goes out of control, all they did was aim a tranqulizer gun at him, and fire. They are also tired listening to Ron Paul delivering his "Gettysburg" address, and to stop him, I really hope they don't aim a valium gun and fire.

"How in hell will he ever convince any normal-NONthinking American...."

Fixed it for ya.

When he went public that a "Silver Circle" -- a token silver coin -- is money, then we know he is a bogus "monetary expert", and a fake "Constitutionalist"!

If you do NOT know up to now why as a candidate for president Ron Paul is "unelectable", then you cannot discuss with us his candidacy as something desirable.

If you still do not know why for many years now Ron Paul had always been running for president and could not even get a GOP nomination ... then you should stay out of this discussion.

I suggest you get first a background knowledge how odd Ron Paul is as a throwaway or disposable candidate for president.

If you are aware of his background, you will know how screwed up his understanding of monetary economics is. Here’s the problem: Ron Paul has no business intruding into this very technical and specialized area of Economics when his field of learning is Medicine! He likes to talk Economics when he is no economist by any stretch of the imagination; he only makes himself a laughing stock when he "lectures" the Chairman of the Federal Reserves, a scholar with a Ph.D. in Economics, how to run the country’s monetary system.

As a politician from the "lunatic fringe" [New Hampshire newspaper], you really want to know how screwed up he is? He thinks the U.S. economy will function without a Central Bank which is impossible [to abolish the Fed became his obsession in Congress, but for many years his yearly authored bill never came to pass].

He doesn’t only want the Fed abolished but also the IRS and the income tax, which is impossible.

In this Millennium, he wants that gold and silver should be used as money which is way, way out of the question; in international affairs, he wants to turn this richest and mightiest nation on the planet into a RECLUSE, and that is not going to happen. In his mind, 911 is no fault of Al Qaeda but of the American people, which is plain insanity ... shall I go on, and on?

With all these twisted ideas he publicly indulges in, can he ever become president? If you believe he can, something must be wrong with you.

How in hell will he ever convince any normal-thinking American that he became an economic expert and a Constitutionalist by studying Medicine?

In a just recently concluded congressional committee hearing, he "lectured" Dr. Bernanke, Chairman of the Federal Reserves how the monetary system of the country should be run ... when he doesn't even know that in this Millennium, a "Silver Circle" [a silver token coin] is not money!