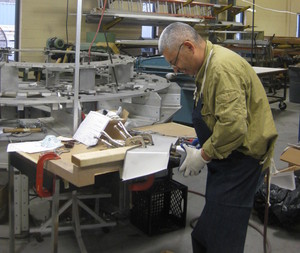 The White House says that restoring the U.S. manufacturing sector is an essential part of getting the economy back on track.

Over the years, the steady loss of good factory jobs is a big reason why wages have stagnated for people who never went to college, says Dean Baker, co-director of the Center for Economic and Policy Research.

"The reality is that historically, and at the present still, [manufacturing] is a source of relatively good paying jobs for people without college degrees," Baker says.

That's about 70 percent of the workforce.

The plan put forward by the Obama administration last month would cut the corporate tax rate from 35 percent to 28 percent for all companies, and reduce it even further for manufacturers. It would also close a lot of the loopholes and deductions they now enjoy.