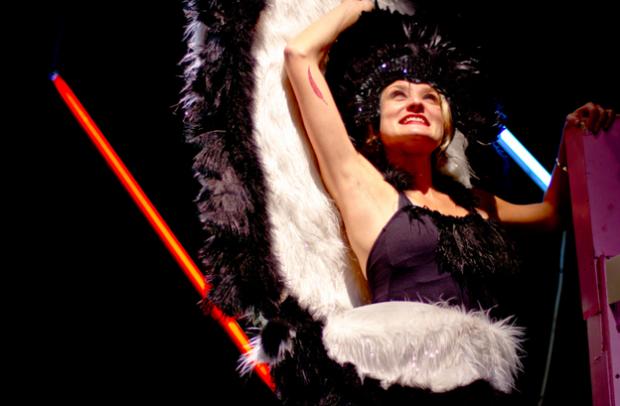 It's hard to write a musical about capitalism. Bertolt Brecht and Kurt Weill gave it a shot with The Threepenny Opera. The musical Urinetown took a crack at it. Now comes Mission Drift, a two-hour experimental work created by a group called the Theater of the Emerging American Moment. The musical attempts to probe the love and ambivalence Americans have for endless growth.

Mission Drift's director, Rachel Chavkin, wondered what defines American capitalism compared to capitalism in the rest of the world. She went to composer Heather Christian.

"Rachel approached me and said, 'I think we should write a musical about capitalism,' to which I said, 'That's impossible,'" Christian remembers.
The members of the Theater of the Emerging American Moment, or "the TEAM," as they call themselves, began reading about Wall Street and teaching themselves economics. They read Milton Friedman and listened to podcasts of NPR's Planet Money. Chavkin says she got her best answer to the question of what defines American capitalism from an Australian.
"She said, 'Well, everywhere has capitalism — it's just you're more religious about it here than anywhere else,'" Chavkin says. "Ultimately, what I think the show is getting at is that there is something both thrilling and unsustainable about capitalism as it is lived and practiced here in America."

The TEAM's Mission Drift: a Teaser from Rachel Chavkin on Vimeo.