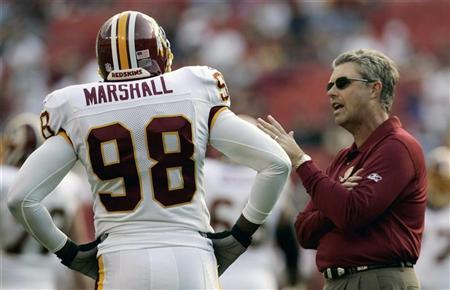 A scandal in which U.S. football players got rewarded for injuring opponents could have legal consequences, with prosecutors, players and even fans getting in on the judicial action.

By Sunday morning, four National Football League teams were linked to a "pay for pain" scandal that came to light in Friday's NFL announcement that New Orleans Saints defensive players were paid for "big hits" that took opponents out of play.

Over the weekend, reports of bounty programs at the Washington Redskins, Buffalo Bills and Tennessee Titans emerged in The Washington Post, the Buffalo News and The New York Times.

Saints defensive coordinator Gregg Williams, said by the NFL to have orchestrated the Saints scheme, was on the coaching staff at each of the four teams.

The NFL, which is trying to improve its image in the face of

lawsuits by former players over concussion injuries, is likely to mete out its own punishment against teams involved in making bounty payments, which could include suspensions, fines and restrictions on player recruitment.

But pieces of the scandal could well end up in the courts, say legal experts.