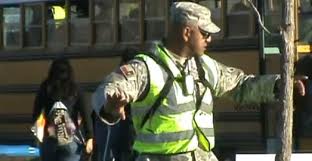 Uniformed troops from the Texas State Guard were used for the purposes of crowd control during the Zilker Kite Festival in Austin this past weekend, with video showing the troops ordering parents and children to board school buses at the end of the event.

Disturbing footage of the troops controlling the movement of attendees was filmed by Infowars reporters, in addition to a police helicopter circling above. However, the website of the Zilker Kite Festival attempted to downplay the Guard’s involvement as if it was completely normal.

Under the headline What are Soldiers doing at the Kite Festival!?, the website states that the troops were there to “help to manage the crowds during bus loading and unloading, at parking lots, and around the event.”

According to the Texas State Guard’s website, “The Texas State Guard (TXSG) mission as a branch of the Texas Military Forces is to provide mission-ready military forces to assist State and local authorities in times of state emergencies, with homeland security and community service through Defense Support to Civil Authorities (DSCA).”

No information concerning the TXSG being present at the Kite Festival appears on the website.

The use of the military to oversee domestic roles normally ascribed to police officers is a sign of America’s deepening decline into a state of de facto martial law.

These troops are pure SCUM...I hope their Children see them,and I hope their neighbors see them also.SCUM Their parents are SCUM for not teaching them what an American really is.Not one of these SCUM BAGS should be allowed back in their towns...PURE SCUM!!!!

Real Oath Keeper scum.These guys are in the American Military....I say their parents much be investigated.

Conditioning. Its up to the parents to teach their children that this in not the way it is supposed to be and just what to do if and when there is an attempt to lock them down not allowing them to go home with their parents. Also, these parents need to find out just who those teachers are that will allow that lock down to happen and those that are against this. It mean life or death for those children. Not that it really happened in Schinlers List, the movie, but who is to say that those that want to take these children from their parents are not programmed for such a scenario. Another thing to think about. Those soldiers are your brothers, fathers, mothers, sisters, cousins and next door neighbors. If you know anyone in the Reserves, ask them if they would follow those orders to keep children away from their parents in the event of a terrorist attack. Those Reserves may come to understand that they should do another thing at that time to help those families get their children away from those that want control of the public. On the other hand, you may find out those that will follow orders no matter what the situation and alert your neighbors accordingly that that person is a threat to the safety of that person child. Its up to the parents to do something about this, and stop it now or face the terrible outcome of having their children taken by an out of control government.

It's all about training, conditioning and moving the sheeple into a mind set of normal procedure. Slavery is freedom and freedom is slavery. It will continue to be business as usual.

The NWO has arrived.