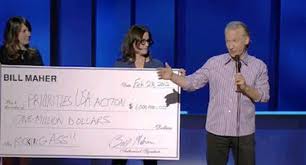 In response to the media firestorm surrounding Rush Limbaugh's insulting comments about Democratic activist Sandra Fluke (comments for which Limbaugh apologized), Kirsten Powers writes about the liberal men who have used misogynistic rhetoric without facing the same outrage. Powers notes that "the grand pooh-bah of media misogyny is without a doubt Bill Maher—who also happens to be a favorite of liberals—who has given $1 million to President Obama’s super PAC." She continues:

Maher has called Palin a “dumb twat” and dropped the C-word in describing the former Alaska governor. He called Palin and Congresswoman Bachmann “boobs” and “two bimbos.” He said of the former vice-presidential candidate, “She is not a mean girl. She is a crazy girl with mean ideas.” He recently made a joke about Rick Santorum’s wife using a vibrator. Imagine now the same joke during the 2008 primary with Michelle Obama’s name in it, and tell me that he would still have a job. Maher said of a woman who was harassed while breast-feeding at an Applebee’s, “Don't show me your tits!” as though a woman feeding her child is trying to flash Maher. (Here’s a way to solve his problem: don’t stare at a strangers’ breasts). Then, his coup de grâce: “And by the way, there is a place where breasts and food do go together. It’s called Hooters!”

Fall 2021 Update: The latest on the 'own an RV camping spot' trend

Where are the workers? Cutoff of jobless aid does not bring them back