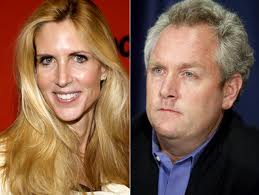 In an exclusive interview with The Daily Caller, outspoken conservative columnist and author Ann Coulter shared her memories of the late Andrew Breitbart.

Coulter reminisced about Breitbart’s early days working with Matt Drudge, creator of the groundbreaking and influential Drudge Report. Breitbart would cover the times when Matt was asleep or flying, a time in his life that Andrew himself jokingly referred to as “being Drudge’s Bitch.”

Coulter also took time to comment on how his passing will affect the conservative movement.

“Who knows what else he could have done,” she told TheDC. “It’s like John Lennon dying, what other music might he have produced.”

Referencing Breitbart’s time with the Huffington Post, Coulter paid him a sideways complement playfully stating that “The Huffington Post does a lot of good for our side, ’cause we get to see what lunatics have to say.” She also credited him with promoting Fox News’ popular Redeye and its host Greg Gutfeld, as well as working with Gary Sinese  on the underground network of conservatives in Hollywood known as “Friends of Abe.”

Author: The Media's Agenda is Not to Mislead People, But to Demoralize Them

Fall 2021 Update: The latest on the 'own an RV camping spot' trend

Where are the workers? Cutoff of jobless aid does not bring them back