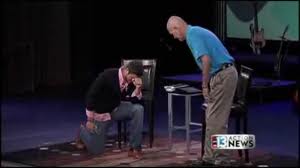 LAS VEGAS (AP) — This weekend, the long lines, huge crowds and jersey-clad sports fans in Las Vegas were jockeying for a chance to get into church.

An estimated 20,000 people, including one family that arrived at 4 a.m. Saturday to be the first in line, showed up at Canyon Ridge Christian Church over the weekend to hear Denver Broncos quarterback Tim Tebow share about faith and football.

“You get bashed against the rocks sometimes,” Tebow said Sunday at one of the church’s four weekend services. “But when you have a relationship with Christ … One of my favorite quotes is, ‘I don’t know what my future holds, but I know who holds it.’ I know what my rock is. I know who’s holding my future.”

Tebow has attracted immense media scrutiny for his unconventional throwing style and his outspoken Christian faith. His routine of dropping to a knee after a touchdown has evolved into a cultural phenomenon dubbed “Tebowing.” He coached senior pastor Kevin Odor on how to strike the prayer pose during their interview-style talks on the church stage.

“One of the reasons I get on a knee is because that’s a form of humbling yourself,” Tebow explained. “I want to humble myself before the Lord and say thank you for this opportunity. Thank you for letting me play the game I love.”