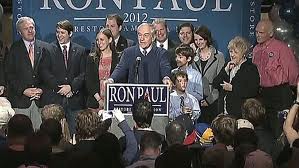 Watch Ron Paul's Full Super Tuesday Speech: 'The Cause of Liberty Is on a Roll'

1 Comments in Response to Watch Ron Paul's Full Super Tuesday Speech: 'The Cause of Liberty Is on a Roll'

Here are my comments on this speech with time indexes:

2:00  Paul mentions 100th anniversary of the Federal Reserve Act.  He wants to celebrate it by repealing it.  Current pc-speak associates the word "secular" with "non-religious" or maybe even "anti-religious".  Quite apart from religious connotation, the word "secular" also carries with it a 100-year subtext.  Roman emperors could change everything about the prior ruler's administration.  Justinian saw the problems posed by the unpredictable abrupt changes.  He re-wrote all Roman law in a uniform code as part of his vision of a "secular" government.  As a monument to that vision, he built the Hagia Sophia which stands to this day.  Since Justinian, deliberate artificial major changes have been spaced by 100 years.  Paul's proposal regarding the fed observes that.  Secularity is one of the things that comes up in my book.

3:10  He gets into his foreign policy and war issues.  At some point in this, he says "change" the constitution.  Perhaps that's what he meant.  But what good is changing the constitution until you get private citizens and government officials to observe it?  I think he many have meant "observe" here.  That would be a big change if the constitution were more faithfully observed.

6:16  He discusses the current financial crisis.  In '09 and '10 when I wrote my book, the economic downturn had not as yet hit me in the wallet, so I wrote it off.  Since then, it has come home to me personally, so the sound of a peace dividend sounds pretty good to me.

7:30  He gets to entitlements and war - LBJ's "Guns & Butter".  There's got to be a better way forward for our dear and fabulously wealthy country.  A vote for Romney, Santorum, or Gingrich is simply a vote against Obama (to whose policies I am strongly opposed).  Gingrich and Paul contrast more strongly with Obama than either Romney or Santorum.  Of those two, Paul is the one who most clearly and strongly advocates constitutional positions.  To see impact of current policies on the future of our dear and fabulously wealthy country, foreign policy, domestic policy & financial policy (tax, borrow or print) must all be taken into account simultaneously.  Paul does this here.

9:20  Paul gets on the topic of foreign spending.  This is a hot-button issue that gets a lot of cheers from his supporters.  Still, it is one of the weaker parts of this speech because $5 billion dollars is just a drop in the bucket of the current budget.  Heck, even Paul proposes $1 Trillion in cuts.  What's 5 billion?  Diverting funds to needed domestic infrastructure is a good option.

11:40  He mentions limited government.  A favorite topic (and dream) of mine.

13:30  He discusses the (so-called) "Patriot Act".  ‘Calls it the "Un-Patriotic Act"  Says that if it had been called the "Repeal the 4th Amendment Act" which is what it does, it never would have passed.  He scores points with me on that.

16:00  One of the things I get into in my book is the "unenumerated rights" language of the 9th amendment.  Rights can be thought of as "exceptions to power".  This works enough of the time.  If a right is an "exception to power" and the constitution acknowledges "unenumerated rights", how can it allow "un-enumerated powers"?  To do so would render it totally meaningless from the get go.  Paul's argument on this point is on the mark.

16:50  Paul gets on the NDAA here.  Lincoln suspended Habeas Corpus during the Civil War.  The NDAA codifies that suspension.  The Constitution trumps legislation according to Justice Marshall in Marbury v Madison.  Since habeas corpus protections are written into the constitution, absent a constitutional amendment, they cannot be revoked, except as noted, which does not include legislation.  Paul scores points with me here.  Both Romney and Santorum are strangely quiet on this issue as far as I know.

18:10  Keynes - with emphasis on money manipulation.  Keynes had other ideas as well.  Typically, current financial policies are attributed to Keynes.  Keynes is as often (if not more often) blamed for bad results of current financial policies as those in office supporting said policies, or those in federal reserve who have at least as great a hand in making and implementing said failing/failed policies.  Poor Keynes.  Here Paul focuses on the policies.  He already advocates ending the fed, so he's off the hook for not taking on the media on this point.

20:45  I've seen it on the net that Paul wants to go back to pre-1930 policies.  This is not factually correct.  Here he answers that detraction saying those detractors seem to want to go back to the pre-American Revolution Tyranny.  Many points in my book support this.

I want to make clear that Paul really was not strong on my radar until this election cycle.  In the past, I have always pulled 3rd party levers in Presidential elections, having long ago concluded that there was little difference between the "two" major parties.  I only voted at all to maintain griping rights.  If I ever voted for Paul before, that's how it happened.  I might not get the chance, but if I do, I'll vote for him on purpose this time.