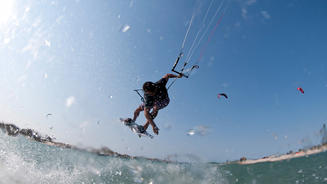 A kite surfer's journey across the Red Sea turned into "Jaws" meets "Cast Away" on Friday.

Polish kite surfer Jan Lisewski was reportedly stuck in the water for two days, surviving on energy bars and fending off 18-foot-long Red Sea sharks with a knife.

Polish media said the 42-year-old's attempt to cross the Red Sea from El Gouna to Duba went horribly astray when ocean winds halted his journey and left him stranded. Lisewski said he sent out an SOS signal right away, but it took the Saudi Arabian Coast Guard nearly 40 hours to find him. His first night was difficult- he ran out of water and turned his kite into a raft he could sleep in. He spotted a fisherman's ship and managed to fire a safety rocket, but wasn't picked up.

"They must’ve not seen it," Lisewski told Polish media.
The second night Lisewski said he drifted to a reef and was attacked by sharks. He said he thought they were attracted to him by the color of his kite. He counted 11 sharks in all, in a fight he said lasted the entire night.
"I was stabbing them in the eyes, the nose and gills," Lisewski told the Polish state news agency PAP.